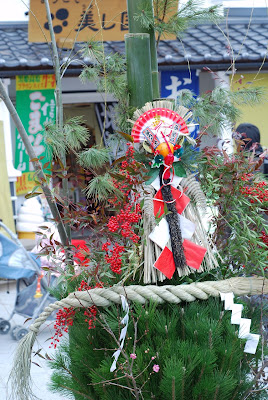 Since it is the new year season, let's talk have some festive talks. Japanese celebrate new year's day on January 1 after the Meiji Restoration around 1873. Before that, new year was celebrated according to the lunar calendar as the Chinese, Korean and Vietnamese. Traditionally, a pair 門松 or kadomatsu meaning "door pine" is placed in front of homes to welcome ancestral spirits or kami of the harvest. They are placed after Christmas until January 7 and are considered haven to the almighty kami.Kadomatsu typically consist of pine, bamboo, and sometimes plum tree sprigs which represent longevity, prosperity and steadfastness, respectively. Cheers to a new year, Bansai~
a 10:34 AM

Zen Wall - 禅壁
The mantra of Zen Wall is simply to share the goodness of healthy living within an enclosed living spaces. Many times, we neglect our surroundings. Fusing ancestral with cutting edge aesthetics, Zen Wall has graced the walls of Japanese temples, castles, homes, teahouses for over a century. Not only does it bring a long-lasting aesthetics, it also bring about positive goodness to the environment and human health. This is a blog on the importance of eco-friendly finishing which everyone should have an option to learn more. We strive to improve to become a socially and environmentally responsible corporation.

Our mantra is to bring to the market healthier material and ensuring that the interior wall finishes are manufactured through eco-friendly process. With our commitment to deal with our clientele directly in 2007, we trust you will be satisfied with our prompt and more efficient service, as we try to improve from time to time. We welcome all comments, praises, compliments and criticism in order to help us serve you better. Ultimately let's achieve the Satori or enlightenment together. In the meantime, relax and medidate with Zen Wall - simply the healthier wall...