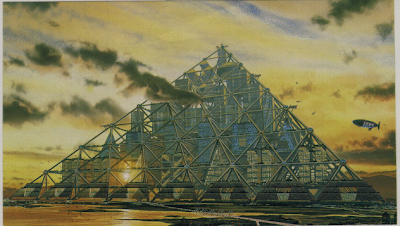 Today I came across an article on a structure called Shimizu Mega City Pyramid, a proposed construction of stacking 55 smaller pyramids each with the size of Luxor Hotel in Las Vegas, over Tokyo Bay in Japan. The mastermind behind this futuristic architecture is Dante Bini, the Italian architect who has created super low cost self-resting house which can be constructed in less than 60 minutes, and which he called The Binishelter constructed out of bamboo, clay with natural fibers, wood, durock, steel etc.

The structure of Shimizu Mega-City Pyramid is said going to be 12 times higher than the Great Pyramid in Giza Egypt, and would house around 750,000 people. If built at all, this will become the largest man-made structure in the world.

Guess what?! due to weight issues, the design can only rely on some super strong light weight materials based on carbon nanotubes --- material of the future, which allows the pyramid to stand against high winds, and survive earthquakes and tsunami.

If successful, this structure will solve Tokyo's lack of space problem, as it will be zoned into residential, commercial and leisure areas with each building having its own energy resources.

Zen Wall - 禅壁
The mantra of Zen Wall is simply to share the goodness of healthy living within an enclosed living spaces. Many times, we neglect our surroundings. Fusing ancestral with cutting edge aesthetics, Zen Wall has graced the walls of Japanese temples, castles, homes, teahouses for over a century. Not only does it bring a long-lasting aesthetics, it also bring about positive goodness to the environment and human health. This is a blog on the importance of eco-friendly finishing which everyone should have an option to learn more. We strive to improve to become a socially and environmentally responsible corporation.

Our mantra is to bring to the market healthier material and ensuring that the interior wall finishes are manufactured through eco-friendly process. With our commitment to deal with our clientele directly in 2007, we trust you will be satisfied with our prompt and more efficient service, as we try to improve from time to time. We welcome all comments, praises, compliments and criticism in order to help us serve you better. Ultimately let's achieve the Satori or enlightenment together. In the meantime, relax and medidate with Zen Wall - simply the healthier wall...